Waking up in the morning and looking out the window and watching to rain coming down meant that this was going to be a challenging day as the forecast was for rain all day. Today is also one of the longest walking days that I have on my schedule. My plan had today at 35kms (but I think this was based on walking the main A Road) and when I looked at other blogs of people who had done todays walk they said 40kms to 42kms.

Today was going to be a test of my wet weather kit and how I would cope with walking 8+ hours in the rain. Leaving the B&B, the only positive was that it was typical English rain and not very heavy. The first half of my walk was along the Grand Western Canal towpath which meant it wpuld be along a good path and flat. The Grand Western Canal was built in the early 1800’s and used to extend from Tiverton to Taunton, but today only the Devon portion remains open. The Somerset portion section was closed in mid 1800’s and now is back to farmland with some walking paths. 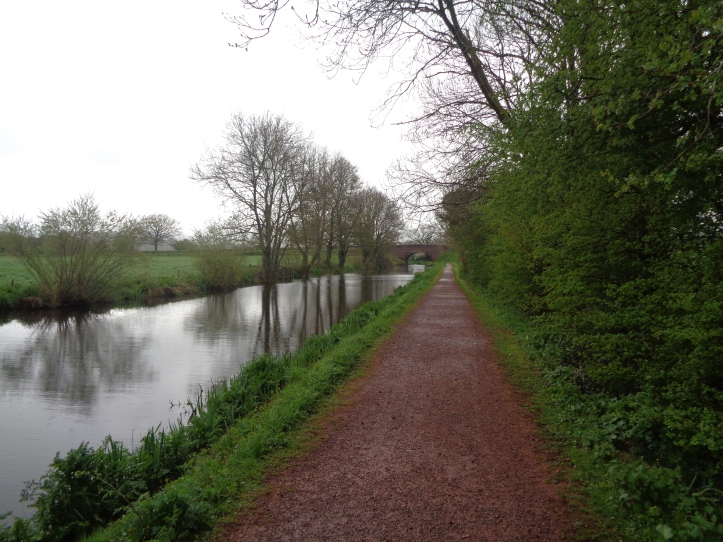 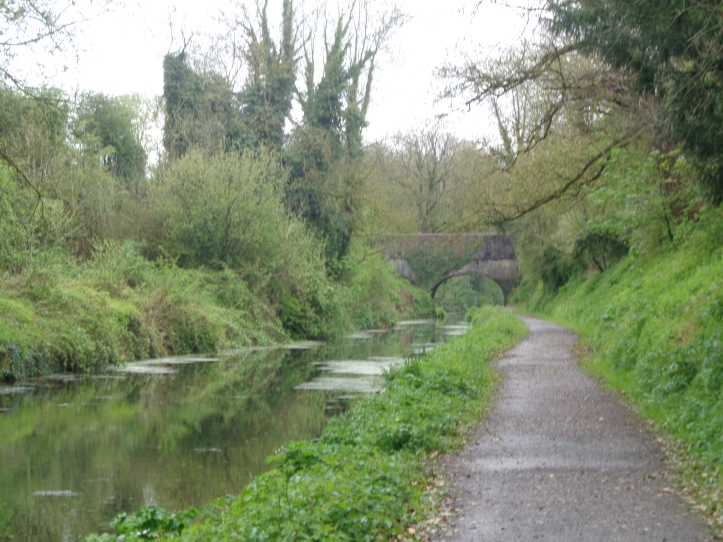 The canal has hardly any boats (I think I saw about 10 in total) because it is only 11 miles long and doesn’t go anywhere and has no links to other canals.

The canal was fairly quiet due to the weather and I only encountered dog walkers (who didn’t seem to be having much fun), but most of their dogs seemed to be having a blast and ducks who the weather was perfectly suited to. I also passed 2 separate pairs of swans and swanlings.

The rain continued to fall most of the time on the canal, but keep alternating from light rain, heavy rain, no rain. The canal had multiple bridges across it and these provided little refuges for me to get out of the rain. It was during one of these stops I discovered that my wet weather gear wasn’t up to the task. My boots and Berghaus over-trousers worked great and keep both my feet and pants dry. My rain coat and gloves didn’t fair so well. My Macpac rain coat worked well for a short time but when I removed it after a couple of hours I found the water had seeped through and my t-shirt & wool icebreaker fleece were also wet. It was the same with the gloves I had. Luckily after lunch the rain stopped and there were only fleeting showers for the rest of the day.

Along the way were the remains on a Lime Kiln built in early 1800’s to provide materials for the canal construction.

The only problem with walking a non-operational canal was there wasn’t options for pubs to stop at for lunch. I tried a couple of towns off the canal, but couldn’t find any pubs open and wasted time and additional kms trying to find a lunch stop. With no luck finding a pub, lunch consisted of all the trek bars and dried fruit that I was carrying.

At the end of the Devon section of the canal, it just stops and turns into fields. You can still see in some places where the canal used to run, but in other sections it just looks like farmland. I assumed the end of the canal was the point that I completed my time in Devon and moved in Somerset county.

At the end of the canal, I tried following a cycling path via the streets but this seemed to follow a long way to get to Taunton, so after a couple kms of road walking (some of it wasted distance), I decided to use public footpaths and joined the West Deane Way. The West Deane Way mainly followed the old canal path and through famers fields. From the green of the canal path, I then started across green pasture & brown plowed fields and associated fields of mud in both. I assume this house has a massive David Bowie fan if the tribute on the window is aything to go by. 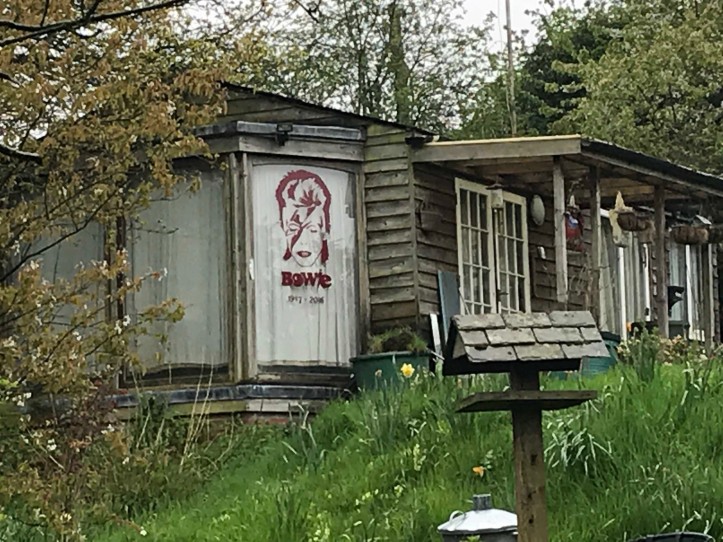 Some of the fields has cows in them and they all stop and look at you when you enter the field and then only move out of the way when I got close to them. Once past them they would all start following me and by the time I got to the style for the next paddock the whole herd was following.

Near the end of the West Deane Way, the scenery changed again as I got to walk through a massive fields of Rapeseed that took me an hour to walk around.

Near these fields were trees with strange leaf formations in them. I though they were nests of some sort, but up close they didn’t seem to be nests and I still have no idea of what they were. 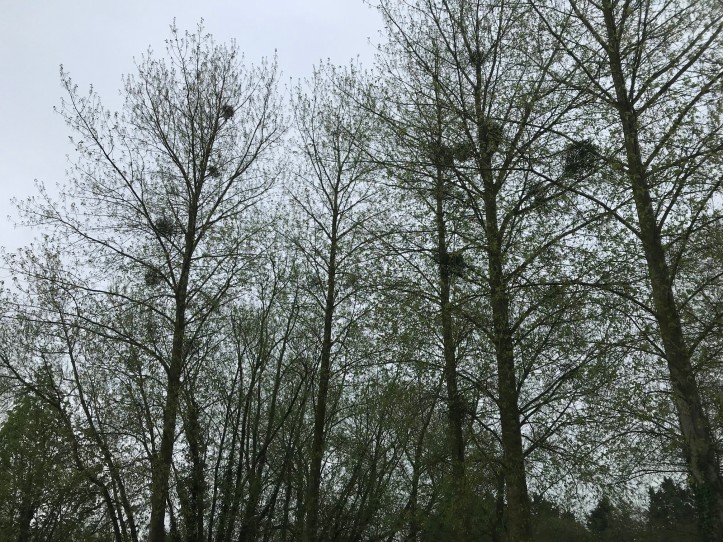 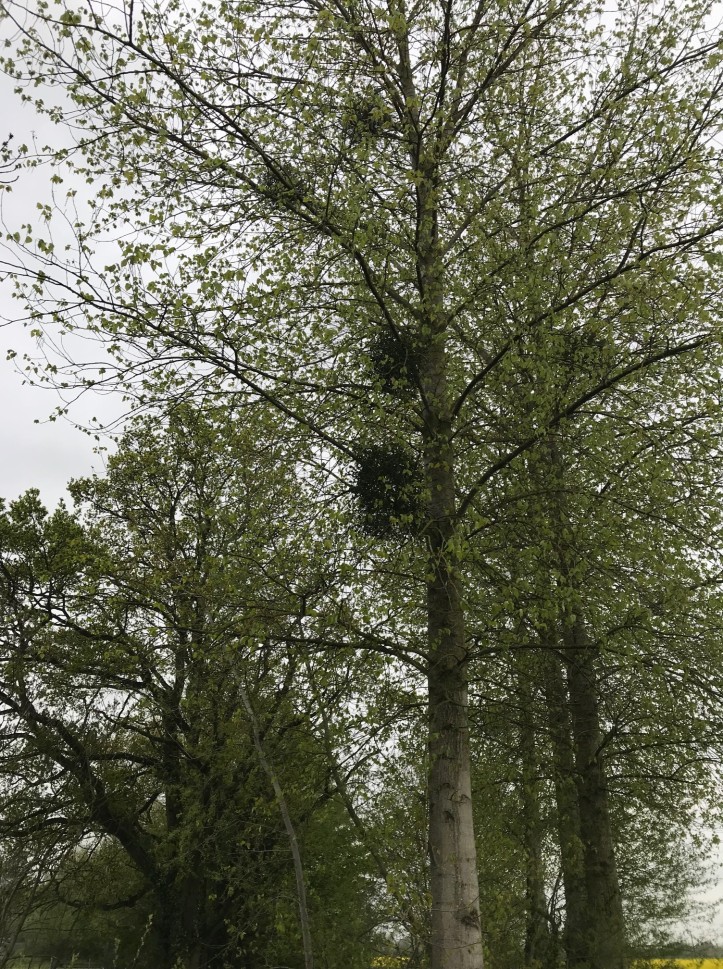 After spending hours crossing fields, I saw a town and crossed a train overpass assuming this was Taunton only to find it was a satellite town and I had to either go back into the fields or take the road into Taunton. By that stage I was over slipping and sliding through the mud, so decided to take the longer route via the road to the B&B.

After leaving Tiverton at 9am and walking almost all day, I made it to the B&B at 7pm and was a very tired and had very sore leg muscles & feet, but at least I now know I could complete a marathon however a time of 8 hours 24 minutes is not very competitive. No big Friday night in Taunton as I was in bed by 9pm.

There will not be a Day13 post as its my rest day in Taunton.